I don't often like to curse on my blog but this one was filled with surprise and delight.

A friend of my Mrs. Jody Hagedorn contacted me one day asking if I could fix a jacket for her. At this point I had just graduated from school and was a little overwhelmed but thought "yeah I guess I can do that." I was transitioning a bit coming off the insanely busy beheaded chicken phase moving into enjoying space in my schedule phase.

I met up with her and she began to tell me the jacket belonged to her grandfather and was about the only thing that they had of his after he passed. Not only was it a jacket it was an antique trout fishing jacket, with a special removable pocket that houses trout! I did a little research on these jackets and couldn't find anything similar. A very unique jacket!

We blasted around to a few fabric stores and thrift stores looking for something that might be waterproof as the old fabric that looked to be somewhat of an oilcloth had deteriorated. We settled on some camouflage (Bob's favorite kind) some lining fabric and new snaps. I felt inspired having all the materials, then overwhelmed again for it was a bit of an undertaking. Not to mention this was somewhat of a secret project. Jody didn't know if he realized the jacket was gone or not.... 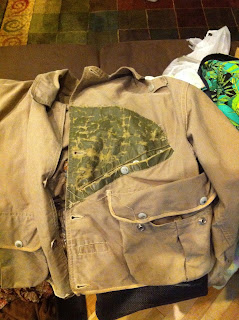 It had a big old zipper and seven snaps that needed replacing. I held it in my hands gazing at it, taking it apart in my head and putting it back together with new pieces trying to figure how I was going to maneuver that front pocket opening pictured above. 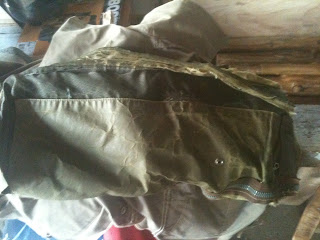 I didn't get to it for a day or two as it sat on my sewing table. Those two days felt like I had maybe gotten in over my head. I hadn't really done anything like this before 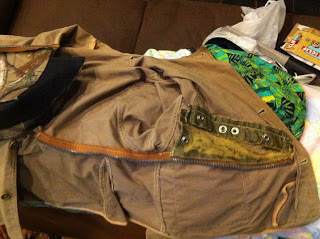 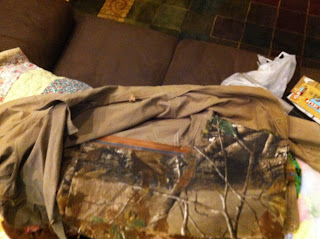 I even got to use a hammer to get the snaps in!! Everything just came together so well. It was beautiful. (and manly) 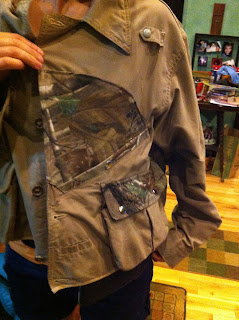 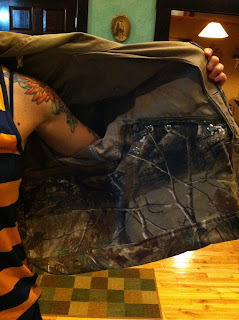 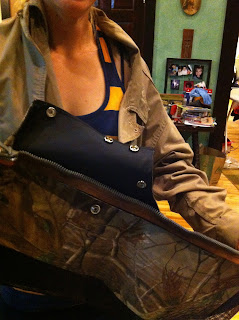 I had my trepidations, maybe Jody's husband wouldn't really think much of it? ...you know how guys can be "oh neat." Jody was beside herself with excitement she knew he would love it. But I still wondered.

I was so surprised when received this message at almost midnight after delivering the jacket. (and also after checking a few times to see if she left me any messages...)


"You gotta be shittin me!!! He loves it and thinks you're awesome!"

Jody went on to say that Bob was just beside himself. He was thinking of new projects that I could do to improve his nephew and brother's ponchos!
I think he had written it off as a lost cause and had kind of forgotten about it thinking it would just need to be replaced, meanwhile Jody was just sweating bullets that he might ask where the jacket had gone! 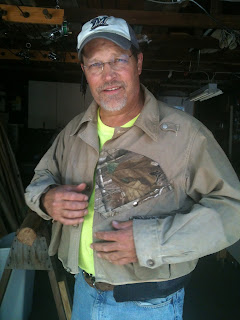 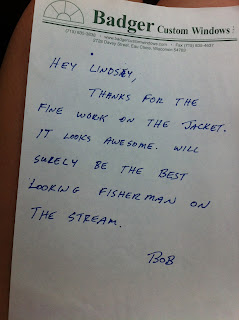 Then to get this note to top it all off. I'm not sure who is more pleased myself or Bob! I just want to squeal and cry out of sheer happiness! This one just hit me square in the heart!

Thank you so much Jody for thinking of me! XOXO
Bob I'm so glad that this jacket made you 'reel' happy! (sorry I had to! in the year of my absence from blogging my humor may have gotten really, REALLY lame! ;))
Posted by Lindsey at 9:47 PM 3 comments: 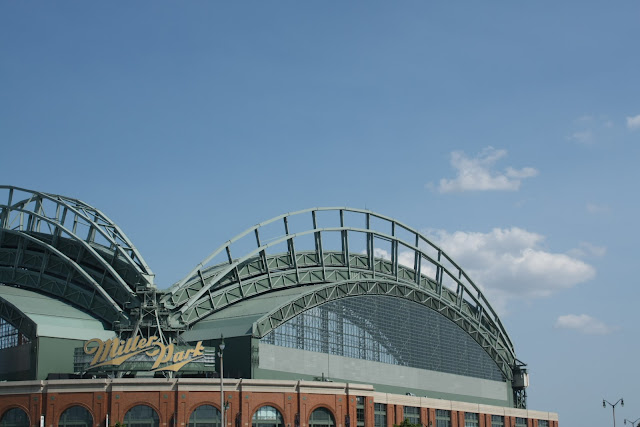 The final day. The only picture not taken in my hometown area. We took a huge family trip to Milwaukee, to watch the brewers play. Four generations worth of family, Grandparents, Uncles and Aunts, Cousins, and my cousins little boy, as well as a pair of soon to be cousins' babies :)

What a fun weekend, and exhausting. Lots of laughs, surprises, and fun.

Not sure what the next photo project will be....? Colors perhaps, I feel like I need a break but maybe not, it only takes an instant to capture...??
Posted by Lindsey at 6:40 PM 1 comment: 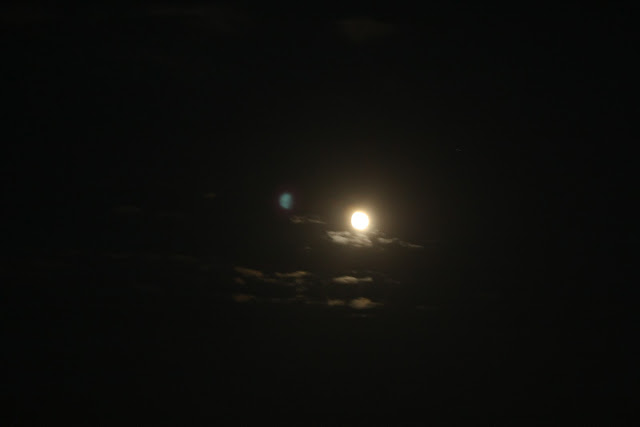 A couple little clouds floating past the moon.
Posted by Lindsey at 6:35 PM No comments: 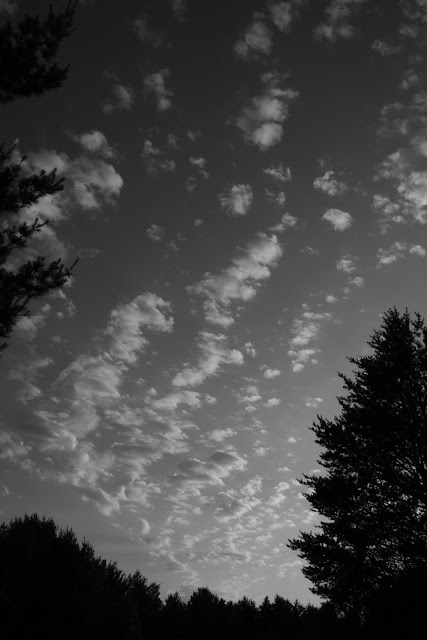 Decided to go black and white for one.

This one trips me out a little. It looks like water not the sky. I took it sitting in my parents driveway. The clouds were painted beautiful oranges and touched with pink a little while after this. It was beautiful. I smiled because I couldn't take a picture of it.
Posted by Lindsey at 8:29 AM No comments: 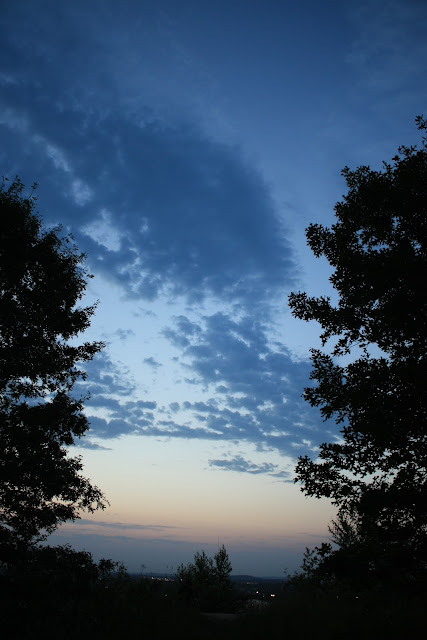 I felt happy, running up the hill that overlooks Eau Claire. My flip flops announcing my steps. I had just about crested the hill when I noticed a man sitting at the lookout point. I froze, slowly focused and snapped a picture, then took off down the hill with the same happiness but an added giggle, heart pounding. I felt like a deer stopped in it's tracks, then bounding down the hill. Having captured and unsuspecting human...tee hee.

I had found a turkey feather near this hill last time I was here. My heart felt full, this time it was a raven feather. I now have two raven feathers and two turkey feathers.
Things are coming in pairs.
Posted by Lindsey at 10:01 PM No comments: 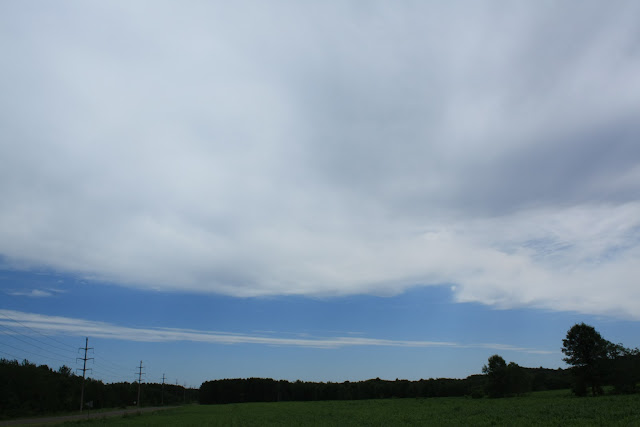 Something about the line...
Posted by Lindsey at 9:55 PM 1 comment: 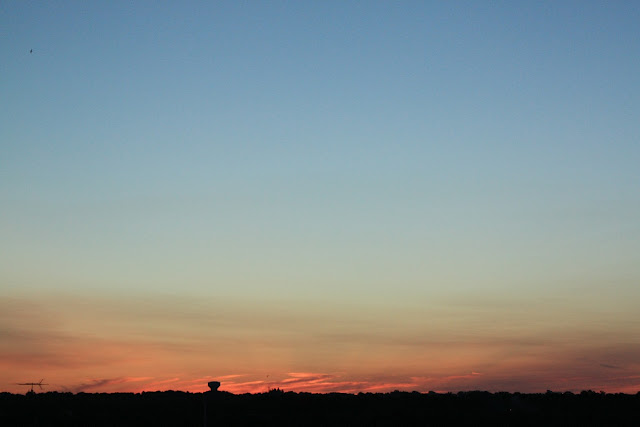 Standing atop my car at the top of the only parking structure in Eau Claire, on my tippy toes to eek the lens over the chain link fence.
Posted by Lindsey at 9:53 PM 1 comment:

Lindsey
I grow where planted, spread seeds of change, and entangle people with a sense of inspiration and community. I hope to bring joyful thoughts and love to all who visit my page. I am making a transition into living in the now and being a conscious presence.

Topics I Write About